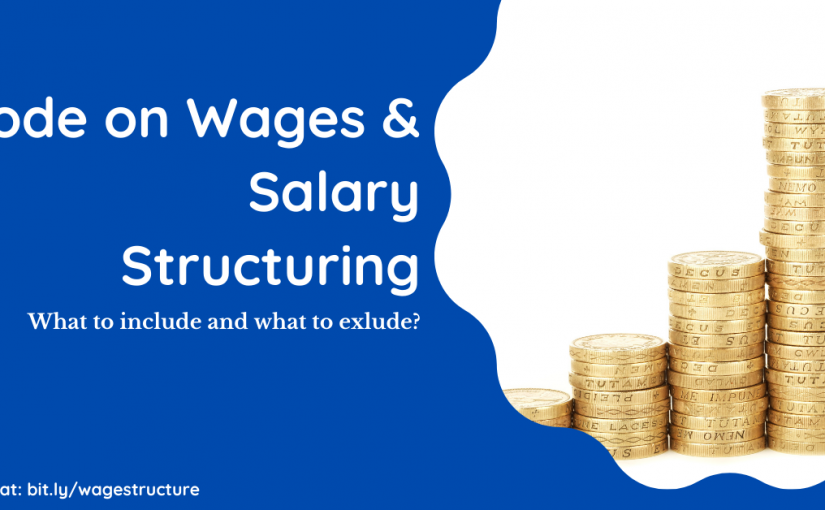 April 2021 is around the corner and there are a lot of buzz about the four new labour laws which are going to be in effect from Apr 1, 2021. One of them is Code on Wages and that’s effectively a revised version of Payment of Wages Act 1936, Minimum Wages Act 1948, Payment of Bonus Act 1965 and Equal Remuneration Act, 1976.

One of the major questions that HRs are facing these days is how the definitions are changing and how it’s going to affect the salary structures. It is their Y2K problem. Employees—who are not in the HR community—are worried as to how this is going to impact their take home salary, as depicted by some of the news outlets in the country.

Please make sure that you read my previous article on how salary structuring works (keep in mind that it was pre-Apr 2021). That article will help you understand various jargons in the Comp and Ben sector and make sure that you get the difference, inter alia, between Gross Pay, CTC, Employer Contributions, Employee Deductions, etc. Let’s call that article a prerequisite for this one.

Code on Wages, along with the other three new labour laws, comes into effect from Apr 1, 2021; however, rules for all the four are not yet finalised and notified, but we hope that would happen soon so that they are in effect from the aforementioned date.

This article discusses some major impact these acts bring in to the Compensation and Benefits regime. I will focus more on the payroll structuring per se, rather than other major changes therein. Let’s dive in:

Definition of wages seemed to be one of the complicated definitions in the labour realm in India for many years. EPF Act defined wages differently than the ESI Act, and every other act in the country had its own definitions of Wages. With the new set of four consolidated labour laws in place, this confusion is removed. All the laws now provide a single definition of wages, as given below:

As per the Code on Wages:

“wages” means all remuneration whether by way of salaries, allowances or otherwise, expressed in terms of money or capable of being so expressed which would, if the terms of employment, express or implied, were fulfilled, be payable to a person employed in respect of his employment or of work done in such employment, and includes,—

Further, the Code excludes the following components from the definition of wages: bonus payments;

Additional Clauses on Calculation of Wages

The goes on to state the following, which forms the crucial part while structuring salaries:

Reading the Clauses in the Act in Detail

Can the Inclusion Components (Wages) be more than 50%?

Yes. The act only says that the exclusion components should not be more than 50%. That clearly means that the inclusion components should be at least 50%. This also means that the Wages should be at least 50% of the gross pay. It can very well be above the 50% limit; and it can also be 100% of the salary. Provide the entire Gross Pay as Basic Pay, and no one will question you (though this is not ideal for both the employee and the employer).

Further, no acts in India talks about the CTC. It’s a term that our companies and accounting officers coined. When an act refers to the word salary, it, generally, means the gross pay.

Are all allowances excluded from Wages?

Is Special Allowance Excluded from Wages?

This is a hot and debated topic over the last few months. Indian companies use Special Allowance as a bucket to fill in to reach the CTC. That is, when the CTC is split into different components such as Basic Pay, HRA, etc. the remaining amount  goes to Special Allowance so that they all add up to CTC. As long as your offer letter and/or the appointment letter does not have any specific definition (vide Exclusion List# E) related to Special Allowance, it is INCLUDED in the Wages. Here’s a presentation from Deloitte if you would like to have a look.

If you disagree with the above reading, please let me know in the comments and why.

Is HRA excluded from Wages?

Yes, HRA is excluded from the Wages Calculation.

Is Variable Pay included in Wages?

Performance-based variable pay will be an inclusion component in Wages, since that does not appear on the exclusion list.

So, what’s the big deal now?

Wait, can you tell me what all components can be there in a Salary Structure?

It would be unwise for an outsider to comment on how your components should be. However, below are some ordinarily paid salary structure components that one may find in the IT industry. I am trying to give you a comparison of those components with respect to the act.

My recommendation would be to choose the excluded components that may be relevant to job families and job roles in your organisation. If you have certain such components to defray special expenses already in your organisation, you won’t have to remove them and may not have to make much changes. The catch is that these components will help reduce your Wages (yet keeping at the minimum requirements) and help employees save some income tax (flexi benefits—more on that later).

Hey, what if the Wage goes high? Is there a Problem?

Well, as I mentioned before, the definition of Wages is now standardised. All the acts say that the benchmark on which retiral benefits and other such employee benefits are calculated will be based on Wages. Hence, from a financial point of view, it would be a good idea to look at where you need to keep the balance.

Some companies still continue to pay EPF on the Basic Pay (which may still be over and above the statutory limit of 1800). Such calculations of EPF, ESI, etc. will now be on the Wages component. Some companies may take a hit unless they restructure the salaries since a hike in Wages may imply a hike in employer contributions as well. Likewise, the Gratuity is currently based on Basic Pay, which may change from Apr 1, 2021, subject to final terms in the rules yet to be finalised. Similar is the case with Statutory Bonus as well, whose details are still not finalised. You may read the act for more information on these provisions; I am skipping the details since it may derail the purpose of this act.

Can you give me a sample salary structure?

Yes, I will. Let’s consider the IT industry in Kerala for example.

Hey, you talked about Flexi Benefits. What’s it?

Flexi benefits is a way for providing income tax exemption benefits for your employees. There are certain salary components that the Government of India allows employees to save taxes on. The idea is to allow, at the start of the financial year, employees to choose these benefits if they want them. Employer may then exclude those components from TDS and at the end of the financial year, the employees shall submit the proofs to the employer who may then re-calculate the taxes based on the quantum of proofs. Some such components are:

It may also be noted that if the company otherwise reimburses any of the above components, the same shall not be duplicated as a salary component.

In the interest of controlling the Wages, you may want to revisit if you should be offering all of these flexi benefit components at your organisation. If some employees do not opt for these, their Special Allowance may increase and hence the Wages. Have a look and decide for yourself!

Rs. 1800/-, which is the 12% of the statutory limit of Rs. 15,000/- per month is the mandatory (upper cap) payment to EPF. Any amount above this is voluntary. If the organisation decides to cap the EPF at Rs. 1800/- per month, they are at their will to do so. But if the organisation has provided a higher figure in the offer letter/appointment letter, they will not be able to take a one-sided decision of reducing this component. Maybe, you want to revisit your offer letter/appointment letter templates for future issues 🙂

HRA can. 40% of Basic Pay is the limit for income tax exemptions. Don’t confuse yourself between income taxability and definition of Wages.

How’s it going to affect my take home salary?

If your organisation has included Gratuity as a component in the CTC, then if the Gratuity component goes up and CTC remains the same, it will effectively reduce your take home salary. Similarly, if the CTC is fixed and the employer redesigns the salary structure in such a way that the EPF/ESI component goes up, that will also affect your take home salary. It all depends on how your current salary structure is defined and how it is going to be in Apr 2021. Non-HR readers: you may want to consult your HR team soon!

This article is written in my personal capacity and advisory in nature. The figures or components mentioned herein have no relationship with my employer or employer’s decisions. Neither my employer nor does my professional role endorses the content in this article. I shall not be liable to any action that you conduct or pursue upon the reading provided by me above.